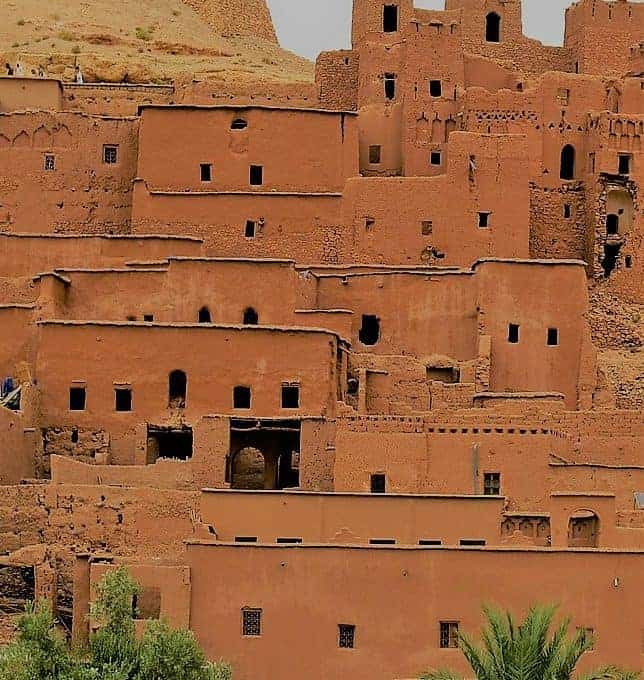 The Moroccan desert is one of my favorite places to visit when I am in Morocco. There is something magical about this arid and minimalistic nature that makes everything stand out: the sand dunes, the long palmers, and the blue sky. There is also something soothing about Moroccan deserts, being completely lost in the wild nature and feeling far away from big city’s buzz and stress. If you plan on visiting the Moroccan desert, Ait Benhaddou village is definitely a non-miss spot.

Located thirty kilometers from the center of Ouarzazate in southeastern Morocco, Ait Benhaddou village is mostly known for its palace, the Ait Benhaddou Palace or Ksar Ait Benhaddou, one of Morocco’s most gorgeous historical monuments. Built ten centuries ago, Ksar Ait Benhaddou stands in an outstanding nature surrounded by a dense vegetation of palmiers and overlooking arid mountains.

Historians say that the construction of the palace on a hill near a river wasn’t arbitrarily. In fact, it was a strategic choice: first, for security reasons as the area is naturally fortified, making entering and leaving the palace possible only through two gates. Second, for economic reasons as agriculture was possible thanks to the close river.

The Ksar Ait Benhaddou has several facilities still in place. In addition to the ancient mosque and the Koranic school, the palace also houses the “collective arena” where the current inhabitants meet during family and religious events and two cemeteries, one Muslim and the other Jewish. At the top of the plateau is the “collective store” used to store grain.

The Ait Benhaddou palace was designated by UNESCO in 1987 as a world heritage. It has an architectural structure of 1,300 square meters, interspersed with many long and narrow alleys, tangled in a unique geometric shape.

Some historical sources point out that about 98 families lived in the palace until the 1940s. Nowadays, only five families live in Ksar Ait Benhaddou, and one of them turned her house into a traditional coffee shop, welcoming tourists and giving them an overview of the ancient inhabitant lifestyle.

Although UNESCO’s classification of the Ksar Ait Benhaddou as a global heritage requires constant and careful protection from extinction and mutilation, the restoration process is unfortunately very slow, which really saddens me each time I visit the village. It probably has to do with the region’s lack of budget and the complexity of restoration, as the palace is mostly built with clay. That being said, Ait Benhaddou palace is still a magical place to visit. The surrealistic architecture and the beauty of the surrounding nature make it one of the best desert spots to visit in Morocco. Besides, the beauty of this site has been the décor for many internationally famous films and tv series, like Game of Thrones, Laurence of Arabia, Gladiator and so many other big blockbusters.

My Moroccan Findings and Designs

I'm Safa, a Moroccan Native who used to spend her childhood afternoons exploring Medina streets and embroidering in her auntie's little Moroccan sewing shop. Years later and thousands miles away from Morocco, here I am, connecting you with my passions: Morocco, Moroccan food and Moroccan fashion and design. I hope you enjoy this little Moroccan bubble ☁

Learn More About Me