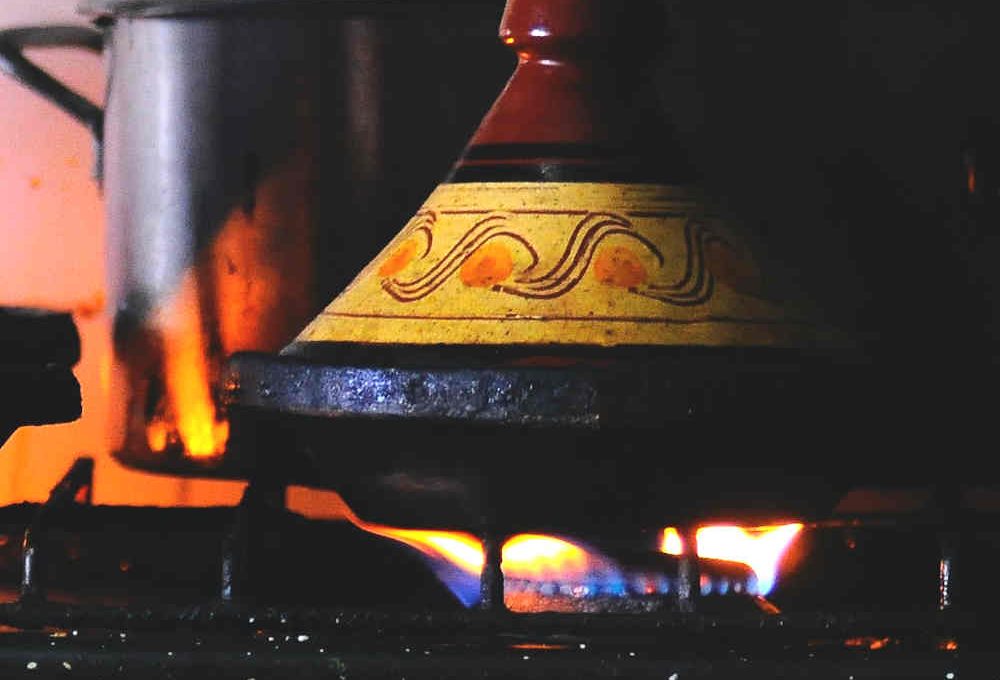 I get so many questions about the Moroccans technique for tagine seasoning and curing. How do we season and cure a tagine pot in Morocco? And how often should seasoning be done in order to efficiently seal a tagine pot?

Tagine seasoning is very important if you want to take care of your tagine and protect it from breaking. It can look intimidating for many but I assure you, it’s REALLY easy and there is nothing complicated about it.

To be honest, even if I grew up in Morocco surrounded by tagines, I was quite apprehensive the first time I seasoned a tagine pot. But trust me, once you follow the steps thoroughly, everything will go just fine.

Do I Need to Cure (Season) my Tagine?

Tagine seasoning, also called tagine cure, should be done to ALL tagine pots intended for cooking, whether they are glazed or unglazed. If you aren’t familiar yet with tagine types, I detail everything in this guide: Finding the right tagine pot for your family.

How do you Prepare (season) a Tagine for the First time?

To cure your tagine pot, you will need to soak it in water for at least a couple of hours. Once the tagine pot is dry, the seasoning will include brushing the tagine pot with olive oil and cooking it in the oven for some time.

It’s important to follow the steps, hours, and temperatures. Once you are done, you will be able to use your tagine pot immediately.

Tagine pots don’t like sudden changes in temperatures. So always keep that in mind when using your tagine pot. If you are new to the tagine pot game or want to make sure you don’t misuse your expensive tagine pot, I highly recommend you check this Moroccan tagine cookbook. Each recipe integrates the right steps to protect your tagine pot from cracking. Plus, all recipes are authentic from Morocco (I have them printed and laminated in my kitchen). A must for tagine users. 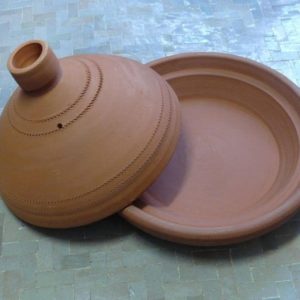 How to Season Your Clay Tagine Pot

first tagine cracked, second one did not

I was so happy with my first tagine but it broke in the middle of a recipe and I didn’t know if it was the heat, the tagine quality … So with the new tagine pot, I followed ALL your recommendations and purchased the ebook you mention and everything went perfectly for my first recipe. I came here to see if I have to season the tagine again or if I’m all good. The ebook mentions using olive oil after some uses, what do you think?

Hi sarah, a lot of things could’ve been the reason why your first tagine cracked. it could be a temperature chock or a recipe that doesn’t ”respect” tagine particularities. The recipe ebook must have helped you as it details every step in the cooking process.
About the olive oil, you don’t have to do it, but it’s a good thing to do after a good number of tagine uses. I do it every 10 to 15 uses of my tagine pot but it’s really up to you. It has nothing to do with seasoning so no need to soak your tagine or put it in the oven. Brushing with olive oil and waiting for absorption is enough. -xx

Can you cure your Tagine on the stove?

Hi Safa,
Thanks for the article! Do you know if it’s possible to cure your tagine on the stove? We just purchased an unglazed tagine but we don’t have an oven. Thank you!

Hi Becky! I don’t think that would work. The whole tagine pot should be immersed in the heat and a stove wouldn’t allow that. Some parts would be in contact with the ambient air and the difference in temperatures may make it crack, plus the handling of the hot tagine can be dangerous for you. If possible, you can do the oven part in a friend or relative’s house, it’s much safer for you and your tagine. -xx

does it work with other oils?

Thank you for the detailed steps. Can I season my tagine pot using coconut oil instead of olive oil? thank you

Hi Paul, in Morocco everyone uses olive oil. I can’t guarantee what the result would be with coconut oil. it may not seal the tagine properly. So to avoid any surprises (especially knowing how hard it can be to find a good tagine pot), I’d recommend sticking to olive oil.

Hi, you seem to have clear instructions on how to season a tajine. But there seems to be quite some variations of seasoning a tajine, which seems odd. My question is; I brushed everything in olive oil, and it soaks it all up. But I do get dry patches after some time, does the tajine need to be ‘shiny’ before going in to the oven? I covered it 3 times in olive oil, what is enough oil? 🙂

Hi David, once you brush your tagine with oil, do you wait before cooking it in the oven? The ideal is to cook the tagine pot right after you brush it with oil and while you have it all shiny and oily. But still, dry patches are not a problem as long as you oil the entire tagine pot. Besides, when you are seasoning an unglazed tagine pot, no matter how much oil you brush it with it, it will end up soaking it up with time. hope this helps -xx

Do I oil both inside and outside of the tagine?

Thank you for the detailed explanation for seasoning a new unglazed clay tagine. When I rub in the olive oil I assume I do this to the inside of the bottom & top pieces (where the food will be). But do I also need to oil the outside of the tagine? I wouldn’t think so but wanted to be sure! Thank you 😉

Hi Rachel, you need to oil the entire tagine, base, and lid, outside and inside. Cracking can happen even on the outside and can spread to the inside, so better be safe. -xx

Forgot to season my tagine

Hi, I bought my tagine 2 years ago. I used it for the first time last week but forgot I had to season it. Even though I’ve used it should I season it now?

Hi Tracey, you were lucky it did not break in the first time, so yes, it’s better to be safe and season it before the next use -xx

I have not used my glazed tagine for a couple of years, should I re-season it?

Hi Richard, I would re-season it again just to make sure any fine and invisible cracks that happened during the 2 years storage are sealed again. -xx

it worked! I cooked my first tagine yesterday and it was delicious. love your content

I’ve been reading your posts about tagines, seasoning, care, and tagine recipes and everything worked great. thank you so much for the tips. I got the cookbook you recommended at the end of this article and I can’t wait to make my children the lemon chicken tagine they’ve been craving since our last trip to Morocco. love from LA

I know this was asked above, but I just want to check/ be clear 🙂 I soaked the tartine about a week ago, overnight. Can I do the over part now or should I soak again, allow to dry then do it sooner after the soaking rather than having a week in between?
Thanks, Lisa

Hi Lisa, no need to soak it again. You can follow with the oven part directly. –xx

My tagine costed a fortune and I was super nervous to break it but your method worked great. thanks so so much

Just got my pot (it’s glazed)
I actually had it in water overnight but about a week ago . Now I want to follow with the oven part of it. Do I have to soak it again

Hi Gia, you can follow with the oven part directly -xx

thank you for the instructions. It worked great!

followed the exact steps and just cooked in my tagine. It did not crack, plus, your tagine chicken recipe turned out DELiCIOUS!!! Thank you twice. You are saving me in this quarantine mess.

I followed all the steps and It worked out! I used my tagine today and I was so worried it would crack, but nothing happened. thank you (and thank you for the chicken tagine recipe too, delicious!)

I wait for your monthly recipe email eagerly and I really love all you share with us. I don’t have a tagine pot but I am now intrigued. The meatball tagine dish looks delicious too. thanks so much for sharing your family kitchen secrets

I'm Safa, a Moroccan Native who used to spend her childhood afternoons exploring Medina streets and embroidering in her auntie's little Moroccan sewing shop. Years later and thousands miles away from Morocco, here I am, connecting you with my passions: Morocco, Moroccan food and Moroccan fashion and design. I hope you enjoy this little Moroccan bubble ☁

Learn More About Me